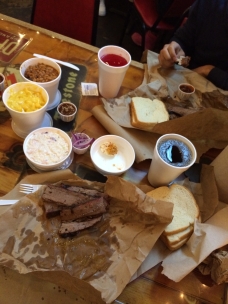 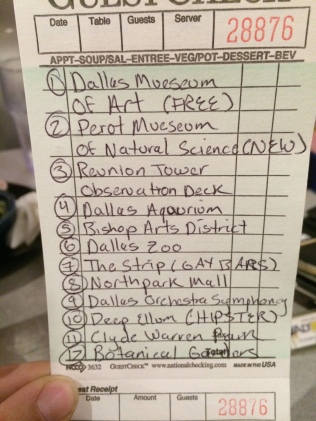 “Where are you staying?” My mom asked over the phone.

“I don’t know yet,” I stated confidently. The prolonged silence let me know that she was worried and carefully wording her next sentence so as to not offend me.

“And you fly out Thursday??” Her intonation alone provided enough evidence to know that she was passing judgement on my travel plans.

I was accustomed to this scenario by now, time after time, telling my mom my plans for a trip or an adventure and reassuring her everything was going to be okay. The truth is, I often travel without any real plans, which makes my mom nervous. To most, like my mother, it sounds like a crazy and irresponsible way to travel. But if you are able to actually experience traveling without a set schedule, you might find it as freeing and exhilarating as I do. For this trip, I was flying into Dallas for a friend’s wedding. I had nothing planned except for a round trip flight to Dallas leaving Thursday and returning Monday, a rental car I was going to pick up at the airport when I flew in, and a wedding on Saturday night at the Dallas Aquarium. The only thing I brought with me was a day pack filled with two day outfits, one dress for the wedding and a Panda onesie. Everything else I was leaving up to chance, fate, circumstance, destiny.

Throughout my trip, I was able to reflect on the reasons why I take pride in traveling without a detailed itinerary. Hopefully, my reasons will prompt you to give up some control and travel without reservations on your next trip.

It All Works Out

For many, traveling without reservations is a hard concept to implement simply because they have this need to be in control. Without control, there is the unknown. The unknown is frightening, especially while traveling; if not careful, things can go wrong at the most inopportune times. But I have found that the more you leave things up to fate, the more things work themselves out without the added stress. For example, before landing in Dallas, I had this overwhelming urge to visit Austin. To satisfy this urge, I had booked a car in preparation for this mini road trip to Austin which was a 3 hour drive from Dallas. A friend had told me I was crazy, saying it wasn’t worth the drive. If I was thinking rationally, he was probably right. Although for some reason I knew I had to check out Austin. The sights, the music, the food, the culture; I just needed to check it out. When I got to Austin, my high school friend Alex FB messaged me that a friend of hers, Joanna, whom I had met previously, was coming into Austin for a mini vacation. For a night I met up with Joanna and her friend Eva. We had a blast checking out different music clubs around East Austin and late night eats at one of Austin’s food truck pop-up gardens. Joanna and Eva were gracious enough to let me crash in their hotel room for the night. The next morning we walked around Lady Bird Lake and took in the incredible views of the city before we parted ways. The unexpected meet up was one of the highlights of my trip and it was all by chance that it happened.

You may be thinking that it was just pure luck that I met a mutual friend in Austin. I would agree with you, BUT the universe had something planned for my stay in Dallas. As I was driving back to Dallas for the wedding Saturday afternoon, I got another FB message from an Ultimate Frisbee friend, Dan, who had moved to Dallas a year prior. He asked about my plans for the weekend, and where I was staying. I chuckled as I sent him a message back stating I had no plans nor a place to stay. Immediately, he asked if he could host me for the rest of my stay in Dallas, and of course I accepted. I was grateful to have a place to sleep, shower, and unwind comfortably in an unknown city, as well as the conversation, company and suggestions for things to do. It was great to catch up with Dan and get his input on my life’s pressing issues. Again, fate was in my favor as everything fell into place.

Open Up to New People

Traveling without plans allows for ample opportunities to meet new, interesting people. After the flight into Dallas my friend Obert, whom I had flown with, and I, went to Buzz Brews, a carefully crafted mix of an eclectic dive bar and 24 hour diner. While there, we met Christian, a flamboyant and charismatic server who provided us with a list of top things to do in Dallas. He took great pride in formulating the list, with some phone-a-friend assistance and compiled it on a guest check receipt. We made such a positive impression on him that he comped us a serving of chips and salsa and a piece of red velvet cake for the road. His list was our guide to discovering Dallas, and it did not disappoint!

After the beautiful wedding ceremony Saturday night, some of us Frisbee folk went to explore Deep Ellum, a diverse, grass-roots breeding ground for the art and music scene in Dallas. Just walking down the street was enough of a cultural experience. Taking in the street art as we listened to the different genres of music amplified out into the street, and navigating our way through the crowds of hipsters, pan handlers, concert promoters, and bystanders was enough stimulation for my senses. In Deep Ellum we entered a Salsa bar at the request of my friend Marie. After ordering a drink and surveying the scene, I decided to go dance. None of my friends followed me to the dance floor, so I decided to dance with a few older women and chat with them. One women was Rayshell, who lived outside of Dallas. She told me about her adventures on her farm, spending the weekends off-road mud jumping on her quad and 4×4 vehicles. She showed me pictures and shared her stories and was kind enough to give me her info in case I came back to Texas. If I did return, she guaranteed I’d see the real Texas and she promised to take me off roading

Christian and Rayshell were just two of a handful of people I was able to meet on my trip to Texas. The quick friendships, or small-talk acquaintances I made in Texas helped me to find deeper meaning and definitely added value to the adventure.

Get Out of Your Comfort Zone

There is nothing more exhilarating to me than stepping out of my comfort zone and trying something new. The rush of confidence is increased ten fold when I am able to overcome a challenging task, especially if it was something I never expected I could accomplish. The entirety of this trip was out of my comfort zone to say the least. I hadn’t planned a trip like this since I had studied abroad in London and couch surfed around Europe, where I was leaving it up to fate to decide where I was going to stay each night. Europe seemed a bit more forgiving when it came to rambling around aimlessly. The United States, a little less so, as people are more likely to think I am homeless than a traveler. In addition to the lack of sleeping arrangements,  my belongings were limited to the size of my small Camel Back day pack. I was flying with Spirit Airlines, and their allotment for a free travel bag was much smaller than I was used to. At first the thought of traveling without a place to stay and limited baggage in a unfamiliar city made me second guess my decision to travel to Texas. Even up until the flight out of Philadelphia, I was unsure that traveling to Dallas was the right decision. Yet, I conquered the doubt inside my head, and listened to my inner conscience. I needed this trip, for the confidence I gained after was worth all of the anxiousness beforehand. 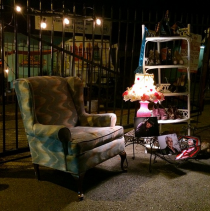 If you think you are ready to take on the experience of traveling without reservations, here are some tips that will help to prepare you.

“Tell me all about your trip!?” my mom inquired enthusiastically as I got into the car from the Airport. I knew she wanted to hear about how I managed to travel around Texas, especially without a planned place to crash each night.

As I shared with her the details of my trip, I could tell she became more and more thankful that I was home safe.

“You really do put yourself out there,” my mom stated with concern, “without any reservations!”

She was right, both literally and figuratively, I travel without reservations.